In the Summer of 1995, a group of concerned Members of the Greater Vancouver Muslim Community, started conducting feasibility study on the establishment of a Dawa’ Center, to cater for the needs of Muslims and to invite non-Muslims to the true Religion of Allah.

Considering the fact that there was no Islamic Centre in New Westminister, Burnaby, North or East Vancouver, this led to a series of discussions and meetings, and the search started for a highly visible and centrally located place.

In October 1995 a suitable place was found in East Vancouver on busy Kingsway, bordering Burnaby, New Westminister and North Vancouver. An agreement was signed to lease the upper floor for three years. After extensive renovations, The Islamic Information Center (IIC) opened its doors to all Muslims in the Lower Mainland on November 1st, 1995.

Friday November 3rd, 1995 the Athan for the first Juma’a prayer at the Islamic Information Center was proclaimed, and little over 40 Muslims attended; but after a few months, the place was so crowded that the lower floor was rented as well, to keep up with the growing number of Muslims and to keep up with the Centre’s activities. Later on the place was al hamdolilah purchased.

If we wanted to mention all the activities that have been organized since then by the IIC ma sha Allah, this space will not suffice, instead, we will list just some of them:

Fast forward to year 2000, the MAC Vancouver Chapter was established in collaboration with the IIC, MSAs and other organizations in Metro Vancouver. Given the expanding need of the community, marked increase in Muslims (15% yearly), and the limitation that the current physical building of the IIC had, the chapter started looking for a larger facility in the surrounding areas. In the meantime, the Chapter kept organizing different activities in addition to the ones already established by IIC:

With the help of Allah and the relentless work of a dedicated working group, a new Centre was located and the necessary funds were collected (donations +short term loans + long term loans) to allow for MAC to take possession of the property on November 9, 2010. This Centre was located at 3889 Keith Road, Burnaby, British Columbia.

Although this building had a lot of the space and facilities that the community needed, over the following months of operations a few challenges arose which made the Centre unsustainable financially and imposed some limitations as to the type of activities we can hold in it, especially that much of its cost was still in the form of loans.

The high property Taxes that were imposed on it because of unexpectedly stringent Burnaby City municipal by-laws and planning restrictions forced MAC to rethink this building quickly to avoid accruing more costs in Taxes since the building was not generating any revenues to offset these costs. As a result the hard but eminent decision of selling the building was made after a strategic review and numerous consultations with the community.

With the clock ticking, the working group had to quickly regroup to find a replacement and sell the current building at a good price. This proved to be very challenging given the Vancouver area real estate market which is notorious for its high prices and limitation of the kind of facility that was needed.

Allah says in surat Al-sharh (94-5) “for indeed, with hardship will be ease”. An absolute unique opportunity presented itself in the form of a 3 level building, centrally located in Vancouver; that has an operational banquet hall and revenue generating rented stores, and a dedicated underground parking space that can hold 50 cars. Indeed, ease has come from Allah and the cost of the building was also very reasonable given the sky rocketing prices in Vancouver. Furthermore, once the current Centre was listed, MAC received 3 offers, and the 3889 Keith St Burnaby property was sold in Sept 2012 and generated a small profit relative to its original purchase price al hamdolillah.

MAC quickly moved to make an offer on the new building at 2122 Kingsway Street and the offer was accepted after a couple of rounds of counter offers.

After taking occupancy of this new building, MAC has undertaken major renovations to make the facility more suitable for the needs of the community. Please read the renovation section for an update and photos of the renovation project.

Please note that Iqamah times are still handled manually till this moment, we are working on providing a better experience for all Muslim community. We applogize for any inconvenience this may cause, and promise to provide a better solution soon. 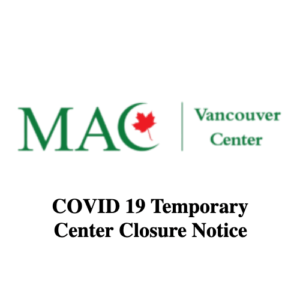